Come Back To Me by Kathy Coopmans

From USA Today Bestselling Author Kathy Coopmans comes a soul crushing story of second chance love.
What does one do when everyone you love dies?
How much is a woman supposed to take before she crumbles?
How much?
Adriana Jensen is the woman to ask.
She’s lost too many people to count.
The one death that destroyed her the most
was her husband’s.
Only… he didn’t die.
What does one do when forced to walk away from his wife?
How much will it take to win her back?
How much?
Blake Jensen, Adriana’s estranged husband, is the man to ask.
He has one question to ask himself.
How much will it take for her to come back to me?

X and I were probably doomed from the start.

That’s what happens when you meet in court-mandated group therapy and then try to steal from him to pay off your blackmailing drug dealer. Former drug dealer, thank you very much. I’m turning over a new leaf and all that.

Which is why I should leave him alone.

Except he tempts me to do things I swore I’d stop doing. It’s that whole gruff, grumbly, anti-social thing he has going on. Him, flame. Me, moth. Something about him calls to me, makes the blood hum in my body. And I don’t want that feeling to end.

She looks like a Disney princess and tries my patience in more ways than I thought possible. Besides the fact that I have to save her cute little ass from jail, I can’t quite figure out how to leave her alone. Even when she’s trying her hand at Breaking and Entering. Especially when it’s myhouse she’s burglarizing.

Yeah, we were probably doomed from the start.

But that’s the thing about being hooked on something so good, and so bad for you—you don’t walk away when you should.

My name is Savannah Miller.

My father is the mayor of New York. One day after my twenty-seventh birthday I was grabbed from behind. A cloth sack was quickly pulled over my head, and I was taken from everything I’d ever known.

I was beaten, starved, treated like an animal, and forced to live in a room with no windows. With no sense of time and no dignity left I finally gave up hope and made a promise to myself to end it all. Unfortunately, it was going to be a slow process.

Then one night an elite group of US Army soldiers came to my rescue. I was brought to a safe house and given two options:

One—Stay under their protection and follow their rules or…
Two—Leave and be guaranteed to be returned to the savages within a week.

I chose option one.

As I work with a therapist and begin processing my hellish ordeal things slowly begin to surface. With the help of new friends and a potential new love I fight to get my life back and make choices that will forever alter my future.

This is my story…

Once upon a time, Jane Jetson took my virginity. And in that time, I gave all of me to a woman I trusted. But things aren’t always what they seem, and sometimes giving gets you a ton of grief.

My name’s Sebastian and this is my story.

It’s not a love story or a sweet fairytale. It’s the story of how a boy became a man. Of how innocence was stained with unforgiving sin, and sex became my weapon. This is the story of me, and how I became BLACK.
Pre-Order Here: http://amzn.to/2wlikfl 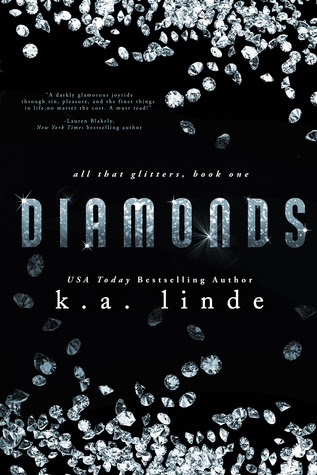 Bryna feels his eyes on her.

He’s at least ten years older than her seventeen years, and he knows exactly what he’s doing to her with that look.

Walking away would be the smart thing to do…

But she can’t. Not that first night when he takes her home and claims her body. Not when he shows up in her life again with expensive gifts to win her trust. Not even when she’s falling for him, and everything else is falling apart…

Find out how Bryna goes from golden girl to gold digger in this tantalizingly scandalous first book in the USA Today bestselling author K.A. Linde’s All That Glitters series.

I Want by Ella Fox

Billionaire businessman Alejandro Cruz detests the dating process and is perfectly content to stay single. But that all changes the moment the quirky house sitter from next door falls into his arms, and his immediate instinct is to hold on tight and never let go. California girl Kaya Porter has a “just say no” approach to dating. No matter how sexy and irresistible Alejandro is, she vows not to fall for him. Alejandro has other plans. This sexy Spaniard knows what he wants, and there’s nothing he won’t do to make Kaya realize that they belong together. Will Alejandro get the girl or will he be left wanting more than Kaya is willing to give?

I Want is book two of the Enamorado (In Love) series. Each book will feature one of the Cruz brothers and can be read as a standalone.

Hot New Release – Oct 10- From This Moment by Melanie Harlow